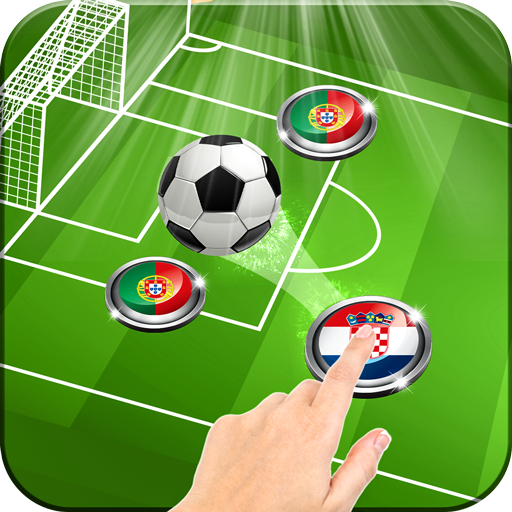 Strike to Goal is a simple sport game. It is kind of mini football cup in 2018. this is a very addictive mind game to fulfill the desire to play football in different flavors Sometimes it is freestyle soccer is not very OSM to play with, Then why not go with board soccer game where you can dribble and dunk the ball in goals. Make football penalties. No fear of foul and us reflections to point a score. Each team has one chance to prove they have the best player to take a shot if he miss his chance you are all set to show your soccer skill and make a GOALHere you can choose your best football team and play against the team you don’t like. it’s crazy fun to play offline and online Chase Your leaderboard around the world after beating your opponents. you can also build your dream team with your favourite players You can play agains single player, Tournament, or Mini cup 2018. Hare you can also select some legends player to play some osm game. Strike 2 goal Fantasy Soccer Star 2018 is shaped in insanely double finger soccer game of 2k18. this type of football game has different names around the world It is well known in Spanish and Brazilian community, Some people called it Button soccer or some says finger football game. Board football or table soccer are also well known names. In North America It is called Penny football, szektorlabda, ghilebis fekhburti and soccer caps In Asia it is played on Table top. Osm Play Soccer star Feature:- You can play Online and offline multiplayer game- Play Against Single star player or Multiplayer- Earn some points to challenge big star soccer player – Amazing dunk ball physics- Collects cups and awards after winning tournaments- Panini Football plague- Speed play mode like hare- Osm Penny futbol game in ami style- Coin football to coup the goal- Dribble the ball with styleIn this game you can maneuver like shoot ball as spin shot, dunk 3D shoot. Play it with more insanely fun while hold the hot wheel for a while and than aim with other finger to score a Goal. The pennies moves like Wheels.It is juegos star futbol game with Forza Plague Osm game. Dribble the game like ini foul. this is an all-purpose fantasy football cup board game Just start cup 2k18 in Russia mode and play Knockout rounds, Quarter finals, semifinals and Finals with you osm soccer star teams and players. Win the cup 2k18 and take the world famouse trophy. SOCIAL MEDIA:-Like & Follow us on Instagram, Facebook&Twitter:★ Instagram: https://www.instagram.com/gamesentity★ Facebook:https://www.facebook.com/gamezentity★ Twitter:https://twitter.com/GamsEntity