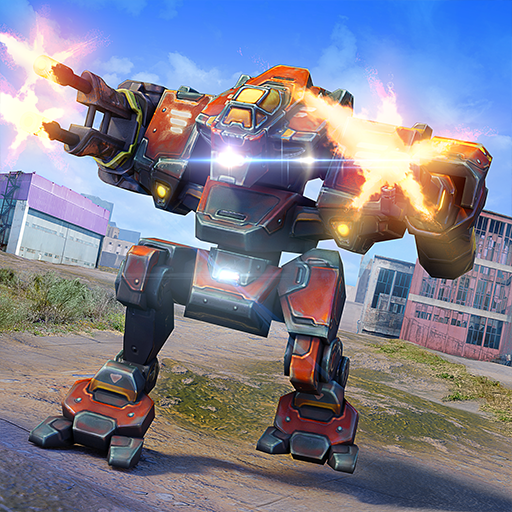 Robots Battle Arena is a breathtaking action game that provides you with a unique chance to steer an invincible super mech! Join epic PvP battles against steel rivals from all over the world!Choose one from 10 incredible war machines, upgrade it with dozens of parts, play with your other players worldwide and dominate the arena! every battle strategy has its own Try different ones, win the battle, and become a war hero! Download Now!🎖GLOBAL WAR CAMPAIGN!Imagine the world of tragedies and havoc left by global conflict. Endless arms races have made a contribution to a major jump in military technology – gigantic mechs have been used in the battlefields with success. every nation in the world is moving swiftly to integrate military war machines into its ground force the player has the opportunity to stand at the helms of one of 10 powerful combat robots that threaten the enemiesepic pvp multiplayer robots battleshey commander are you ready? Play each mission, battle with tanks while sharing your tactical thought process! Besides of expanded single-player mode, you can join the battle by fighting with other players online! Choose the best mech, use your deadly weapons and smash your rivals in PvP multiplayer battles online! Join millions of players worldwide and prove your skills in this new shooter game with robots.🤖10 IRON WARRIORS TO CHOOSE FROM!As a total commander, you are responsible for steering one of this large armed, walking war machine! Choose the best mech, upgrade it using a variety of robot weapon combinations to fit your game style! Every robot is fully upgradeable with 40 levels to reach. Every stage requires additional parts which you can find through the gameplay.🔫POWERFUL WEAPONS AND GUNS!Every mech has its unique shooting style. There are a huge variety of deadly guns and weapons your robot can be armed with: sniper rifle, shotgun, rifle, minigun. each gun has a different range overload time which has a definite impact on your shooting performance Choose your robots and equip them according to your own playstyle. shoot your way through classic adrenaline-filled gameplay and fight against powerful tanksa post-apocalyptic world do you love survival games? robots battle arena is an action-packed multiplayer game where players compete with each other in the post-apocalyptic world destroyed by the global conflict Explore the city full of traps, mines, bombs, and tanks. Make sure your armory is ready for steel warfare!Download this new fast-paced PVP multiplayer shooter game with mech and tanks!Follow us on Facebook: https://www.facebook.com/tbullgamesFollow us on Twitter: https://twitter.com/tbullgamesDiscover our other games: http://t-bull.com/#games