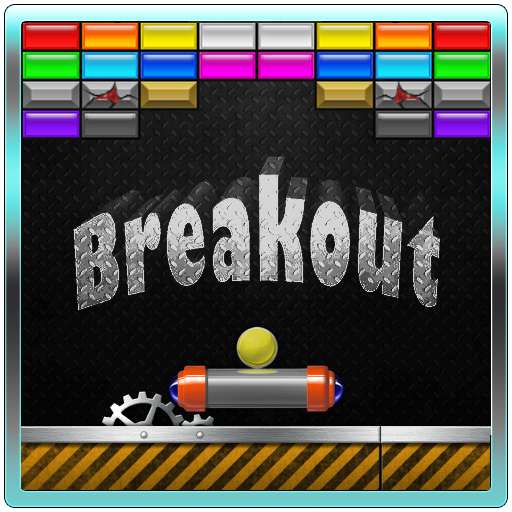 Brick Breaker: Super Breakout begins with eight rows of bricks, with each two rows a different color. The color order from the bottom up is yellow, green, orange and red. Using a single ball, the player must knock down as many bricks as possible by using the walls and/or the paddle below to ricochet the ball against the bricks and eliminate them. If the player’s paddle misses the ball’s rebound, he or she will lose a turn. The player has three turns to try to clear two screens of bricks. Yellow bricks earn one point each, green bricks earn three points, orange bricks earn five points and the top-level red bricks score seven points each. after the ball has broken through the red row and hit the upper wall the paddle shrinks to half its size Ball speed increases at specific intervals: after four hits, after twelve hits, and after making contact with the orange and red rows.Super Breakout is an addictive free game with great graphics and music that includes many items, bonuses and power-ups such as multiball, expand paddle, laser and much more!HOW TO PLAY:- Touch the screen to release the ball and move the paddle (like Ping Pong game).- You can control the trajectory of the ball making it bounce on different parts of the paddle.- Prevent the ball from falling through the bottom of the screen and remove all the bricks to pass to the next level.- Try to get the highest score!- Press the Back or Menu button on your phone or tablet to pause the game.GAME ITEMS AND BONUSES- Breakout with expand the paddle.- Brick Buster with shrink the paddle.- Block Destruction with Reduce the speed of the balls.- Smash Brick with Increase the speed of the balls.- Brick Busting Give the player an extra life.- Brick Breaking with Split each ball into three balls (multiball).- Add to the score the number of points inside the item.- Subtract to the score the number of points inside the item.- Temporarily obscure the level.- Temporarily make the balls do not bounce when destroying blocks.- Temporarily create a wall of indestructible blocks at the bottom.- Temporarily stick the balls to the paddle until the player touches and releases the screen.- Temporarily make the paddle shoots two lasers.If you enjoy other brick breaking games Pong you will love this cool game!