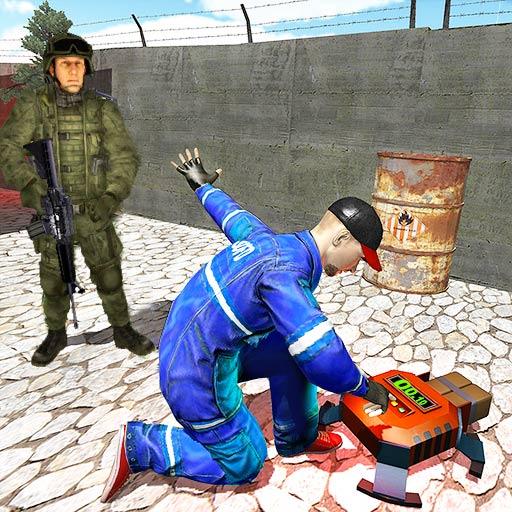 Bombs are a sign on terror but for you and your squad bombs are just modern toys, bomb diffusal is your game and survival during bomb diffusal missions is a piece of cake for you. Being one of the commandos you and your squad are now fully trained to face all type of major survival, shooting and terrorist missions where guns, bombs and killing is not considered a big deal. This bomb diffusal and survival mission is here to satisfy your needs of you as a squad to play with extreme weapons, guns, experiment shooting and real time survival action with your actual bomb squad against terrorist. your base has been engulfed by thrilling terrorists who can fight and show action with their weapons They know how the modern time is, how the modern guns work, how the modern bombs work. They know how to kill with bombs without letting them diffused and they know as well how they can survive. you went to the fight with the terrorists along with your squad This mission was more than a squad war, it was not just a fight it was a thrilling life threatening play. But did not manage to face all the terrorism, your squad lost against the well trained terrorists and they surrendered to the mission in front of all those bombs, modern guns. Your all survival training lost resulting in a loss of survival mission.Your modern Squad and Bomb diffusal mission Now you are back with new and modern squad, modern weapons, modern guns, advance bomb diffusal training. you’ve got more survival spirit this time and you’re going to have more thrilling actions Your squad is now one of the best in every battle and they always win the missions. they are the best known blast dispersal squads in the country Take their assistance utilize their guns and shooting abilities. Let them kill the thrilling terrorist, make their weapons useless and survive among them on your platform. Fight this shooting mission with your guns and trusted squad and take your base back. The only problem is terrorists have planted bombs around the base and in order to make a survival you and your squad has to be pro active. Not only you have to kill the terrorists but find toolbox to diffuse the bombs, locate the bombs and complete your bomb diffusal mission. Your squad is here to help you.Attack and make a survival out of the thrilling bomb areas.Key Features of Bomb Diffusal Modern Squad1- Amazing sounds and drastic effects 2-Thrilling missions with survival challenges3- Buy guns, shoot and aim with high end guns4- Eye catching maze based environment5- Squad goals, take help from companion in fight